David Edwards – A Package You Can Eat, To Prevent Plastic Pollution

Imagine drinking orange juice out of an orange-flavored container that you can chew after. Or ice cream in a non-melting chocolate envelope. WikiCells, unveiled last week, could change how we store our food.

David Edwards once came up with a method for delivering drugs inside porous wiffle balls of inhalable insulin (Idea #3). He wrote two textbooks (Ideas #1 and #2), developed a water-carrying device modeled after a biological cell (Idea #22), and opened an arts and science incubator, Le Laboratoire in Paris, to foster similar blue skies innovations (Idea #9). The lab spawns the kind of apparatuses you’d expect to encounter at Starbucks 50 years from now: a plant-powered personal air filter (Idea #10 and #16), breathable chocolate bars (Idea #15), and, the latest, an edible food packaging called WikiCells (Idea #31). It’s been in development for a long time, but Edwards finally unveiled the project last week in Paris. Now that it’s public, he believes it will transform the future of food.

More than a decade after publishing a study in Science and selling a promising idea for an inhaled drug delivery system, Edwards, a biomedical engineer at Harvard, realized that his idea remained just an idea thanks in large part to the whims of the pharmaceutical market. “In a world where things are changing so rapidly, a la Facebook, the notion of a 15-year or 10-year timeline to see what an idea can really be is not so exciting for an innovator,” he says. “Nor is it very helpful for the public.” 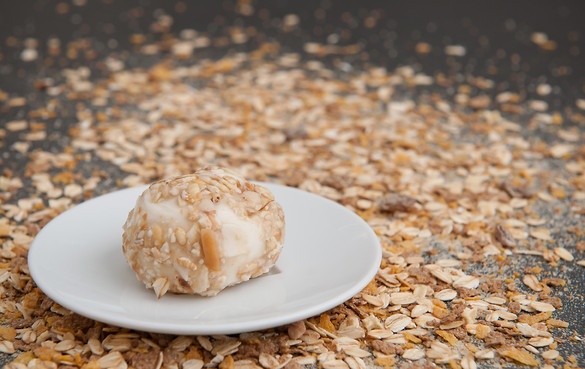 Quick flashback to 1967: Benjamin Braddock, with the pool twinkling behind him, hears one word about the future: “plastics.” Fast forward to 2012: Plastics make up a dramatically increasing (an estimated 12%) portion of our waste. Long after the last drop of orange juice’s been guzzled or the last slice of American cheese been unwrapped, plastic packaging travels down the removal chain, breaking into smaller and smaller bits, fluttering around in landfills or floating in ocean gyres. If all that packaging was edible, though, we’d have eaten it up along with with our OJ and cheese, and it would never be seen again. That’s the idea of the WikiCell.

The WikiCells concept came out of a class Edwards teaches at Harvard, ES20: “How to Create Things and Have Them Matter,” and a subsequent exhibit at Le Laboratoire. An early appearance on French television – with a panel of critics plucked off the street – sealed the deal. “They picked these things up and it was weird in their hands,” Edwards says. “They were saying, ‘Oh boy, this is really weird!’ It was quite funny.” 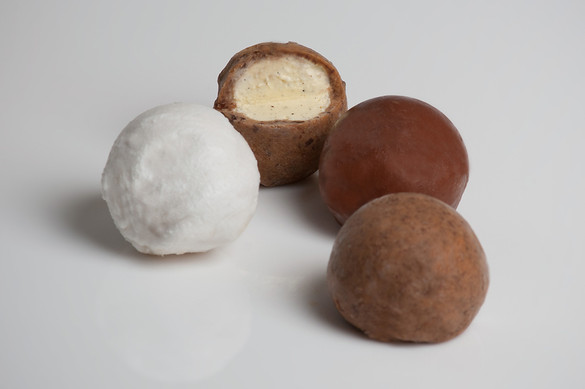 But WikiCells is no mere As Seen On TV™ gadget and Edwards says it’s no mere conceptual provocation either – the launch in Paris proves this. The technology already exists: Electrostatic charges can transform a sugar processing bi-product called bagasse, mixed with chitosan and alginate, into an edible shell membrane. Now any food you might find wrapped in plastic in the store can come in a shell made just using this technology. You’ll be able to peel the shell off and compost the skin like a banana peel or, take a step beyond biodegradable, eat the whole thing like you would chew a grape.

“We’re trying to avoid any kind of chemical modification and just use natural processes and materials,” Edwards says. “The negative is that it’s like the orange – if you pull it off a tree, it starts to go bad. There is a time-scale on this packaging. It depends on what it is and how you store it, but that can be days to weeks to months.” The upside: “It is not like plastic that is around forever.”

The early experiments demonstrated that if edible packaging were to succeed, the public was not prepared to learn entirely novel ways of eating or drinking. Edible water bottles required a cognitive transformation, whereas orange juice inside an orange-like membrane might be slightly more familiar. Indeed, Edwards released an ice cream wrapped in a fudge membrane, an almost too-recognizable treat. “You may say, ‘Dave, that sounds a lot like chocolate-covered ice cream,'” he says. “Well, if you took the chocolate-covered ice cream into your hand, it would melt all over your hand. If you take the Wiki ice cream in your hand, the ice cream may melt inside the fudge. You can then stick a straw into it and drink it like a milkshake.” And there it is, another idea one step closer to fruition.