In 2008, at the closing of a Polaroid factory in Enschede, The Netherlands, Dr. Florian Kaps, an enthusiast of all things instant photography, and André Bosman, a former manager at Polaroid, met for the first time and quickly found common ground: Neither thought the world was quite ready to let the iconic instant film go. So they bought some machines and a building from Polaroid, hired a small team of its most fanatical former employees, and started The Impossible Project, an effort to produce new instant film for old school Polaroid cameras. They’ve been remarkably successful. But if making a viable business out of tiny, so-so quality photographs in an era of ubiquitous smartphone cameras seemed impossible, the outfit’s latest effort is equally unlikely. It’s a collapsible photo printer that lets you turn any iPhone photo into a Polaroid print in seconds. 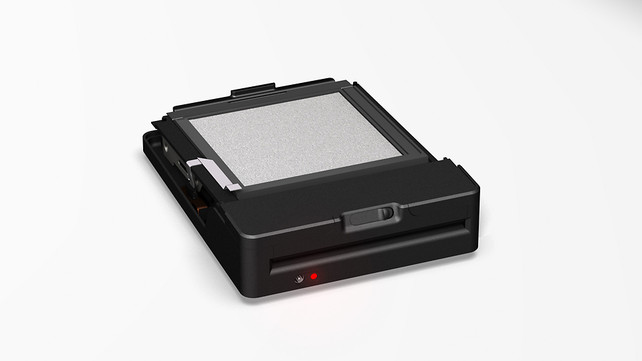 The device itself, dubbed the Impossible Instant Lab, is a plastic square that vaguely resembles one of the fold-up Polaroid cameras of old. It’s about 2.5 inches thick, so it’s not going in any pockets, but it’s definitely small enough to slip in a bag. But the printer’s solution to the analog/digital divide straddles the line between comically backwards and genuinely clever. You pull a 6-inch telescopic tower up from the Instant Lab’s base and put your iPhone in a snug little cradle, face-down. An accompanying app flashes your desired image onto an unexposed Polaroid down below, and instantly the printer spits out a Polaroid print of your smartphone snapshot. It’s like a portable, Ziggaurat-shaped darkroom for your iPhone.

But the Impossible team hadn’t set out to make a printer. The spark actually came as they were developing their own Polaroid camera.

“It was on our journey towards a new Impossible analog instant camera when we came across the idea of the Instant Lab,” the Impossible team told me. “Using our iPhones often to snap photos we were looking for a possibility how to free them from the screen. When we realized how well the first prototypes worked, it dawned on us that this actually may become a great product in it’s own right.” The final design of the Instant Lab was headed by Achim Heine of HLZ, Berlin, who’s previously done work for Leica, among others. 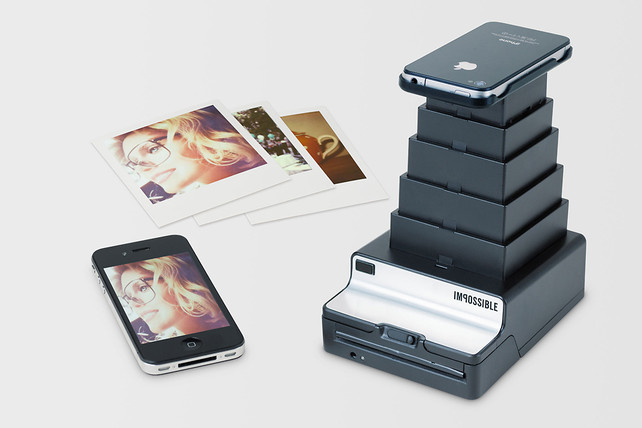 The Impossible team told me that the app will override the user’s brightness settings, ensuring a perfect exposure, but hinted that they’ll allow users the freedom to experiment. “This basic functionality can get expanded to manual settings of exposure time and brightness, filters, image editing, etc.,” they told me. They’re also making their code available to other developers and encouraging them to incorporate Instant Lab compatibility into their own apps.

The Impossible Instant Lab is kind of like one of those fake products that crop up every April Fools Day, a contraption that seems ridiculous and looks ridiculous and, let’s be honest, is ridiculous–but at its heart kinda actually makes sense. Polaroid cameras were never the most portable or boasted the best quality, but their instant pocket-size prints gave them an enduring place in the photographic landscape. Today, Instagram has emerged as a sort of digital Polaroid stand-in, a way to instantly share our digital snapshots, but you can’t pin an Instagram shot to a wall or mail it to a loved one. And in its execution, the Instant Lab continues the great Polaroid tradition of utter simplicity and instant physical reward.

After just a few days, the Instant Lab is well north of its $250,000 Kickstarter goal, and Impossible’s looking to ship the first devices in February of next year. And yes, they’re planning on making cradles for Android phones, too.

You can support the campaign and reserve your own Impossible Lab for $300.

PrevPreviousIsrael and Cycling – Cycle on the Recycled: A $9 Cardboard Bike Set to Enter Production in Israel
NextApple iPhone 5 ReviewNext