Throughout the years 2006 through 2009 Design Engine would receive sporadic visits from an enigmatic Frenchman who had a scheme for a geothermal energy project he wanted us to work on with him utilizing 3D drawings and renderings. While he did, on a few occasions, wine and dine us, he was never forthcoming with any actual funding for this project; nothing was ever actualized. This was just one example of a cavalcade of walk ins who would periodically appear pushing everything from their own designs of furniture to exercise machines and ovens. More often than not these individuals were not able to cover our rate for working on their ideas or were under the impression we could help fund their projects and consequently few of ideas ever made there way to down the pipeline to a finished product.

While our Frenchman may not have had the wherewithal to fund the 3D drawings that could have allowed us to follow through on his project, he did (by virtue of his awareness of geothermal energy) have an understanding of what is viewed as one of the worlds most underutilized potential energy sources for both electrical generation and heating. Geothermal remains to this day one of the most overlooked and least understood of all clean renewable energy sources. In the U.S. wind power and solar are both very visible and noticeable, and wind in particular seems likely to cross 10 percent threshold in electrical generation by the beginning of the next decade; while geothermal is contributing a fraction of 1 percent to the U.S energy grid. Despite this seemingly low amount in percentage terms, this is a significant enough amount of electrical production to make the U.S. the global leader in geothermal generating 3500 MW as of 2015.

The untapped potential here becomes even more pronounced when one realizes geothermal is a baseload form of energy meaning it’s able to contributes a constant and steady flow of energy unlike the more intermittent wind and solar power which would have a greater dependance on smart grid and energy storage technologies. A study conducted by MIT in 2006 articulated that over half of the electrical needs in the U.S. could be met by geothermal energy alone. Countries such as Iceland, El Salvador and the Philippines all acquire over 25 percent of their electricity from geothermal and countries such as Japan and Indonesia could, (like the U.S) conceivably acquire over 50 percent of their electrical generation from geothermal if an
aggressive program were implemented.

The basic principal behind geothermal is capturing and directing the naturally occurring heat beneath the earth’s surface, typically in the form of steam or hot water, to run turbines which in turn generate electricity. There are three types of geothermal power stations all of which use hot water pulled to the surface from beneath the ground. The first of these is called dry steam which uses hot steam to run the turbines followed by a condenser where it’s turned back into water. The second method is called flash steam where the steam is pulled into tanks and depressurized. This so called flashed steam is then used to drive the turbines and this is the most common type of geothermal in use today. A third more recently developed approach, called a binary cycle system, can operate with using water at lower temperatures and makes use of another fluid (typically Isobutane) to generate the steam. This second fluid will then drive the turbines.

For most of the 20th century it was believed that geothermal energy production required areas such as hot springs, locations close to the tectonic plates or geologically active areas to be viable and effectively implemented. However, over the past few decades what is referred to as Enhanced Geothermal Systems have been successfully deployed on a global scale using advances in drilling technology. This has allowed for the creation of injections wells where cold water can be pumped under high pressure into the rock and travel through natural fractures and fissures within the rock. This method, called Hydro-Shearing, does not have the same downside as Hydraulic Fracturing, which the fossil fuel industry uses to bring oil and natural gas to the surface in that the blasting of the rock is not required nor are chemical proppants used.

As a result of the recent successes of EGS, almost any area with hot dry rock below the surface might become potentially viable for geothermal energy production. In effect almost any geographical area can produce energy using this approach if one drills deep enough. It should be noted that while there are emissions from geothermal power plants, most notably hydrogen sulfide and CO2, these emissions are relatively minimal and are about 5 percent of the amount that a coal plant would release for the same amount of electrical generation. In addition emissions control systems exist and these, when installed can reduce the impact of gases and acidic substances from emissions even further. 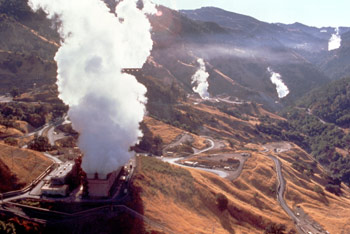 In the United States, “The Geysers” some 70 miles north of the Bay Area remain the largest geothermal field globally and still accounts for over 7 percent of California’s electricity. At it’s peak in the early 80’s it provided more than 10 percent of the states electricity. As of 2015 California produces over 80 percent of the geothermal energy in the U.S. electrical grid. Recent advances also point to how existing oil and gas fields can be used for geothermal energy production. A recent study by the DOE stated that 25 billion barrels of hot water is produced in oil and gas wells each year in the U.S. While this is seen by the drilling industry as a byproduct, this water could, if put to use, generate 3 gigawatts of
electricity.

Having received over 400 billion in funding since 2009, geothermal energy has only now been gaining in both visibility and momentum, and looks likely to become an increasingly large part of the national and global energy supply.