Six years ago, Aaron Coret, a 20-year-old engineering student at the University of British Columbia and an aspiring pro snowboarder, launched from a 50-foot jump at Whistler Blackcomb. “I remember coming off the lip of the jump and dropping my shoulder too hard. Right then I knew that I had lost control,” he says. “The second I touched down, I lost feeling in my entire body. I slid 60 feet to the end of the landing and stared up at the sky, wondering what my life is going to be like now that everything had changed.”

Paralyzed from the neck down after crushing two vertebrae, Coret resolved to increase the safety of the sport he loved. For his final project in an engineering course, he teamed with fellow student and snowboarder Stephen Slen to create a safe landing pad for ski and snowboard tricks. Working from the back of a sail-manufacturing shop, they created a 15-by-20-by-5-foot vinyl-and-nylon landing pad that contained two inflatable chambers. The upper chamber was sealed, while the four-foot-high lower chamber had valves that released a controlled amount of air on impact. Unlike most landing pads, which give so much that they envelop the athlete, the prototype remained firm enough to land on and ride off of, but it had enough give to reduce the risk of injury.

To test the invention, Coret and Slen went to the top of the Blackcomb glacier. Still completely unsure if the pad was fit to ride, Slen took a deep breath, sailed off a jump, landed on the pad—and slid down it perfectly. By the end of the year the inventors patented their design, formed a company (Katal Innovations, named for a unit of catalytic activity), and began looking for someone who knew how to build large inflatables. They settled on a company that makes custom bouncy castles.

But the new models didn’t have the amount of give that made the first version safe and rideable. “We had to pull out the old prototype and have our friends jump on it while we analyzed why it was working,” Slen says. It turned out that the pad didn’t dump air the way they had thought. In their field tests, the prototype’s valves had released some air upon inflation, so when a rider jumped on it there was immediately “some cushioning movement,” Coret explains. That slight, unintentional deflation was crucial to the design. To replicate it, the inventors used blowers and vents in the new version to continuously add and release air.

Within a year after Coret and Slen had finished their new models, Canadian officials called the pair to a meeting to ask them to use the Katal pad in the opening ceremony of the Vancouver Winter Olympics. It was a triumphant moment, and in the past year Katal pads have been demoed in Alberta, California and Colorado. “We had it on the mountain for five months, and there was big buzz surrounding it,” says Bryan Rooney, the manager of racing, terrain parks and special events on Vail Mountain, “X Games gold medalists and Olympians were lining up. It is a different animal than other airbags.” 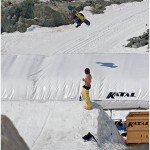 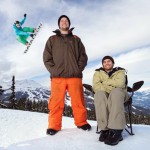 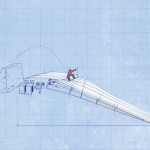 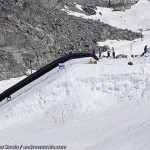 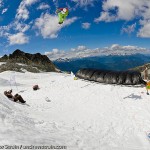 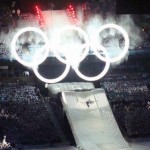