If you combined a stealth jet fighter and an attack helicopter and stuck them in the water, what would you get? Well, according to the folks at New Hampshire’s Juliet Marine Systems (JMS), you’d get the GHOST marine platform. Privately developed for possible use by the U.S. Navy, the boat would reportedly be invisible to enemy ships’ radar, while also being faster and more economical than existing military vessels. The company’s big claim, however, is that GHOST is the world’s first super-cavitating watercraft.

Supercavitation, in a nutshell, involves surrounding an object with a bubble of gas, so it can pass through the water with very little friction. In the case of GHOST, the objects in question are its two submerged buoyant tubular foils. Although the company isn’t clear on how the process works, presumably the foils would have to be designed in such a way that when GHOST’s gas turbines thrust it forward, water is deflected outward at the front of each foil, creating an envelope that closes behind it.

Whatever the case, JMS states that “GHOST is a combination aircraft / boat that has been designed to fly through an artificial underwater gaseous environment that creates 900 times less hull friction than water.” Judging by that statement, it’s hard to say if GHOST actually does create 900 times less friction, or if that’s simply what they’re aiming for.

The three-crew-member watercraft is intended primarily to patrol the perimeter of naval fleets, ready to spring into action against attacking small enemy boats. It is also being marketed as a means of protecting commercial vessels against pirate attacks. It can reportedly carry “thousands of pounds of weapons, including Mark 48 torpedoes” in an internal weapons bay, and could incorporate multiple weapons systems, capable of firing on several targets simultaneously.

It could also serve as a quiet, stealthy means of transporting troops to enemy beaches, or as a fast and efficient way of ferrying people and supplies to and from locations such as offshore oil platforms.

While there’s presently no word on whether or not GHOST has any takers, JMS claims to be already working with a large international defense company on a 150-foot version of the craft, and on creating an unmanned underwater vehicle that utilizes its super-cavitating technology. 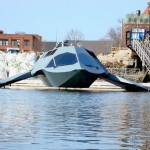 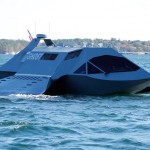 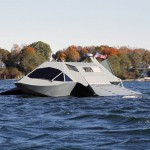 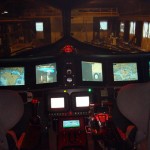 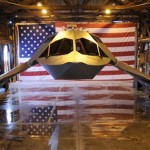