The Best Racing Simulator in The World

Possibly the best racing simulator facility could be in France.

In a dark room not entirely unlike the set for Blade Runner a genuine LMP2 test driver called Thomas asks some awkward questions. “Are you physically fit? Have you eaten recently? Do you need the bathroom?”

Not really. Can’t remember. I didn’t until now.

“The steering wheel is weighted up to 70kg through corners and the brake pedal up to 200kg at racing speed. You will also experience around 2G through corners so you need to be physically fit to control the car.

“And if you have eaten you may want to wait – about four per cent of people vomit. And don’t look at the side screens. They project 300 frames per second for an impression of speed and make some people unwell. This can also make you want to… use the bathroom.”

We’re at I-Way in Lyon, France. It’s a €6million complex, home to €6million worth of professional driving simulators. There are 18 in total – six F1 cars, six rally cars and six endurance cars – and they’re the only ones of their kind this side of Abu Dhabi.

And they’re not some fairground lash-up – the visual grammar is spot on. Three rooms house each sextuplet of “consoles”, all of which are based on real racers.

The F1 area’s got six Cruden simulators, which look rather similar to Toyota’s 2008 TF108. They have a fiberglass and carbon composite monocoque chassis, quick-release steering wheel, Nomex F1 seat and six-point harness.

The rally room’s filled with six equally convincing husks. They’re genuine Citroen C2 bodyshells plucked from the production line (minus the engine) and modified to look like Junior World Rally Championship racers. Then there are the enduros – they’ve got a proper Dallara chassis with bodywork taken from a mould of the Pescarolo C60 Courage.

Underneath, each car’s hooked up to a Cruden Hexatech six-degrees-of-freedom electronic motion platform, which throws the cars in every fathomable direction to create the sensation of pitch, yaw and roll as the driver accelerates, brakes and corners.

This, then, is pretty serious stuff. And could explain why we’ve been forced to wear a full race suit, silly FIA-approved driving shoes and why our instructor, Thomas, is rather well qualified to explain the workings of what is, ostensibly, a computer game.

After you’ve slid into the cockpit, six giant hydraulic rams shove you 72cm in the air with an alarming shunt. Contemplating three large flatscreens, Thomas adjusts the two-pedal box – one for accelerator and one for brake – tightens the harness and says “This is the kill switch. Driving these simulators can feel uncomfortable – if it gets too much just press this button and it will shut down.”

“You have seven gears, a paddle shifter, no clutch, 800 horsepower and no ABS. This behaves just like a real F1 car so find the shortest route through corners, brake heavily, accelerate heavily and try not to crash.”

Whether it’s the convincing preamble or the fact I’m sitting in a very compelling F1 replica, I’m a bit terrified.

Lots of beeping happens then the 100 decibels of bright, deafening engine noise is broadcast directly into my cochlear. At the same time the hydraulic tentacles, which were originally destined for aviation training simulators, gently massage my coccyx while the screens load.

We’re driving the road course – you get a choice of two circuits, this one (which isn’t based on a real track – the licenses are too expensive) and a moon course with reduced gravity – and we’re about to embark on three minutes of qualifying before our seven-minute race.

After a blinding whiteout, the screens reveal I-Way’s graphics quality. Convincing, yes, but not quite Forzaesque richness of detail…

But this place isn’t just about the visuals – the alliance between Thing and Self is uncannily racecar. You’re a bit uncomfortable. It’s too loud. And it’s all extremely intimidating.

The start lights drop to green, you prod the throttle, and the entire car bucks backwards. Change up and you’re kicked sternly in the lower back, and, just like we imagine the real experience is, crashes are utterly, deeply horrid.

When nosecone meets Armco the platform plunges the car’s face into the ground, pushing your shoulders into the harness. Conspired with the platform flinging you into a simulated spin, the screens beam the whole dizzying, nauseating affair into your eyes with such realism that you can quite believe Thomas’ vomiting concerns.

For better and for worse, it’s perfectly immersive. And the same can be said for the rally and LMP1 stages. But what’s remarkable is watching after you’ve had a go for yourself – the angles each car achieves on the platform don’t seem anywhere near as extreme when you’re actually “driving” the car. Which, surely, is a barometer of successful simulation.

So, how much does it cost to get this close to driving a Formula One car? And risk reviewing your lunch for a second time?

Three minutes qualifying and seven minutes racing in an F1 car costs 90 Euros while the rallying and LMP1 start at 75 Euros. 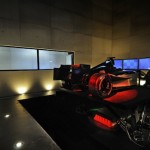 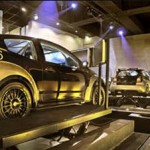 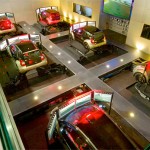 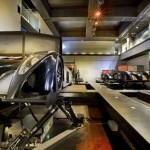 The Best Formula 1 Simulator in the World