Liquid Robotics, developer of the Wave Glider autonomous robotic surface platform for ocean surveying is broadening its activity to offer government and military solutions by establishing the new Federal Business unit. The new unit is expected to double the number of employees over the next months, in anticipation to the growing potential and interest from Government agencies. The new unit will also oversee sales to foreign governments, commencing in 2013. The export of the Wave Glider vehicle is not restricted by International Traffic in Arms Regulations (ITAR), although specific sensors may be limited by the regulation.

Based on positive results from over 130 Wave Gliders already deployed in the oceans, and backed by $22 investment raised in 2011, Liquid Robotics is anticipating a steady growth in the demand for Wave Gliders from the commercial, scientific, military and government sectors. “We are expecting to have a thousand Wave Gliders at sea soon” Grant Palnier, Senior VP at the company’s new Federal Business Unit told Defense Update. The military is part of this vision. Naval applications could utilize constellations of Wave Glider based sensors that could deploy into an area of operation on their own power, by motherships or submarines. Future versions could also be air-dropped from aircraft for quick reaction. Typical missions could range from anti-submarine and counter-mine operations, to persistent surveillance of strategic hotspots in littoral areas.

The military variant will be based on the same propulsion principle of the Wave Glider, with specific customization for the military. Liquid Robotics is designing a modular version dubbed ‘Integrator’ which will be customized for such uses. An application currently under evaluation is the replacement or augmentation of smart buoys dropped by surveillance aircraft or vessels. The new robot offers a cost effective alternative to high end sonobuoys dropped by aircraft, or survey ships that cost tens of thousands a day to operate*. Communications gateway is another likely application, with the floating robot providing a covert link to and from submerged submarines, employing the Wave Glider’s integral acoustic/satellite relay.

“The system already has very low radar reflection, and can be designed to further reduce its reflective and electromagnetic signature, or even be submerged for short periods to mask its presence” said Grant Palnier, Other applications could be customized for littoral and homeland security missions, providing persistent surveillance at sea, supporting port, coastal or offshore installation security, as well as anti-mine and anti-torpedo defense. On such missions Wave Glider robots could carry radar, RF, visual and acoustic sensing integrated with Automatic Identification Systems (AIS) to perform target detection, identification and tracking. According to Palnier, these ‘Picket Fencing’ Wave Gliders are already tasked with such missions, operating as an integral part of the San Diego harbor security.

Wave Glider is an autonomous robotic surface platform propelled by wave power and powered by solar energy. “The robot can operate on extended, continuous missions at sea lasting for years, it has demonstrated station keeping over 21 day period, maintaining position within 40 meters of the designated point at sea” said Graham Hine, VP Product management at Liquid Robotics. The robot comprises two parts interconnected through an umbilical cable. The upper floating board is the surface segment, providing connectivity, and navigation (GPS) support. The submerged glider is tethered about seven meters below the platform. Its keel structure carries a rudder and a set of wings, converting the vertical movement generated by the waves into forward thrust.

Sensors and payloads can be mounted on both sections, below and above water. According to Hine, the system has 100 lbs of reserve buoyancy for additional payloads, which can use the 5-10 watts/day available to sensors (depending on the geographical location, season and weather conditions). The floating board is covered by two redundant solar powers recharging a battery storing 660 watts, sustaining power sustaining the vehicle for up to 10 days of continuous operations under degraded lighting conditions (such as heavy storms).

Hine said the platform can be scaled up or down to support different applications beyond the current dimensions. Wave Glider has also demonstrated it can withstand high storms or flat sea, maintaining position as planned. In fact, by autumn 2012 it is expected to deploy in the Atlantic Ocean and the Caribbean, monitoring hurricanes at sea.

The Wave Glider idea was launched in 2005 as a sensor designed to listen and record the songs of humpback wales off the Hawaiian coast. In 2009 the system was first tested in marine mammals tracking, using towed High Frequency Acoustic Recording Package (HARP). A year later, Wave Gliders were first used by the Navy Research Laboratory (NRL) monitoring environmental compliance in and around coastal test ranges along Hawaii and the California coastline. Naval evaluations have also determined the performance of the Wave Glider’s HARP were comparable to fixed bottom sensors used for similar applications. Few months later Wave Glider was recruited again, this time by oil giant BP, to monitor the recovery of ocean wildlife and around its oil rigs in the Gulf of Mexico following the disastrous oil spill there. In 2011 the company received an investment of $22 million and, as part of its expansion into strategic markets, the company joined with Schlumberger, a major technology supplier to the oil & gas market and an early investor in Liquid Robotics, to form a Joint Venture company to focus on offshore oil & gas applications it already offers BP in the Gulf of Mexico.

One of the pioneers of Wave Glider users is the National Oceanographic and Atmospheric Administration (NOAA) Pacific Marine Environmental Lab (PMEL). The lab became the first government customer for the new robot, recognizing the cost efficiency derived by the robot, as an alternative to survey ships deploying buoys. For its oceanographic survey missions PMEL was required to spend up to $40,000 per day for research vessels, the new robot offered an attractive alternative for an investment of less than $250,000 per unit, for practically an unlimited operational use, independent on season or sea condition. Further deployments are expected soon in Europe and Australia, as part of the company’s international expansion. Four robots are currently crossing the Pacific Ocean on a year-long voyage from San Francisco to Japan. (http://liquidr.com/pacx/). 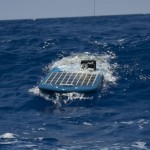 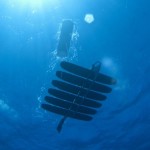 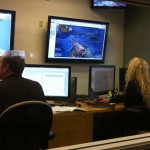