The Bicymple is The Bicycle Simplified, Literally

The Bicymple is, as its name suggests, an attempt to present the bicycle, simplified. And it’s an ambition that, on first glance, looks to have been fulfilled.

Bicycle design is fairly static at the moment, and has been for some time. There are, and always will be, innovations in terms of the technologies and materials used, but the basic layout of a tubular frame sitting in between two wheels, with a chain connecting the back wheel to cranks, is the accepted standard. The reason being because it works, offering ergonomic comfort and a geared system of motion. However, just because something ain’t broke doesn’t mean designers can’t experiment with new forms for the humble bicycle.

The Bicymple is different from standard bikes in one very obvious way: the pedals are located on the back wheel, offering direct drive rather than achieving motion by way of a chain and gears. In this way, the Bicymple resembles a unicycle, but with the addition of a front wheel, a frame, and handlebars.

Every aspect of the Bicymple follows the minimalist edict. The CroMo steel frame is just two bars running above and between the two wheels, with the forks sitting diagonally so there is just a small gap between the 29-inch front and rear wheels.

This innovative urban vehicle is the brainchild of Josh Bechtel of Scalyfish Designs, based in Washington, USA. The concept began with the question, “Is it possible to evolve from the established bicycle design while adhering to the basic principles of simplicity, functionality, style, and excitement?”

It could be argued that this is actually an example of devolving the design, and the functionality of a single-speed bike only goes so far. But the Bicymple is certainly both stylish and exciting. The latter achieved by offering a rear-steering option that offers the possibility of “crab-riding” (as demonstrated in the video embedded below) and a higher maneuverability than is possible with run-of-the-mill bicycles.

The Bicymple manages to be lightweight and sturdy, and, perhaps most importantly, fun. It should also be very easy to maintain thanks to the lack of Dérailleur gears. Unfortunately the Bicymple is just a concept at the time of writing, but thanks to considerable interest already having been shown, Scalyfish is “currently exploring options for larger scale production and distribution.”

If the price is kept low enough for this to be affordable as a fun alternative rather than as a primary mode of transport then the Bicymple could be an exciting prospect. 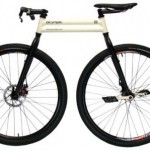 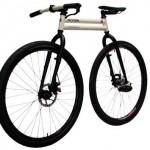 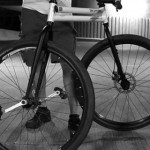 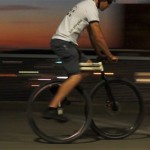