The Technology Behind the Red Bull Stratos Stunt Dive

It was a historic moment: daredevil Felix Baumgartner plunged from the edge of the stratosphere down to earth–a record-setting 120,000 feet, and at speeds that eclipsed the sound barrier. It’s BASE jumping so extreme that it almost counts as space exploration.

In addition to being inherently dramatic and heart-pounding, Baumgartner’s mission (Red Bull footed the bill) also entailed a bunch of cool technology. Take, for instance, Baumgartner’s space suit, which Wired’s Beth Carter recently took a close look at. The suit was designed and built by the David Clark Company, which has been making suits for pilots and astronauts since 1941. The suit is fundamentally similar to ones worn by Air Force pilots who go on high-altitude missions, only it’s tweaked to be more maneuverable, and contains mirrors at strategic locations to give Baumgartner a wider field of vision.

That maneuverability is crucial, since as many outlets reported, Baumgartner needed to delicately control the positioning of his body to prevent himself from going into a consciousness-losing spin. “For Stratos [the Red Bull project’s name], you have to basically adopt certain body position to prevent a flat spin,” the David Clark Company’s Dan Barry told Wired. “We had to design the suit so it allowed Felix to position his body in a lot of different ways.” Barry called the jump “a chance to validate current equipment… It’s more about the science. We have no interest in the record.”

Further specs on the suit, per Carter: the four-layered suit has a liner, a body-fitted bladder, a mesh holding the bladder in place, plus a flame-retardant exterior. The suit is insulated to such a degree as to resist temperatures as high as 100 degrees Fahrenheit, and as low as -90 degrees (though the suit also has a ventilation hose that should help cool or heat the suit, depending on the situation). The whole suit is pressurized to 3.5 pounds per square inch.

The suit’s helmet and gloves can be locked onto the suit via a rotating ring. The eight-pound helmet has a retractable sunshade; to fend off unwanted fogging, the visor also has an integrated heating circuit. The helmet also has an oxygen regulator and a drinking port. For more details, you should definitely read Carter’s full article, as well as Red Bull Stratos’s own page taking a look at the suit.

Another key component of this technological feat is the high-altitude balloon that sent Baumgartner up into the air. The balloon is made of high-performance polyethylene film a mere 0.0008 inches thick; the strips would cover 40 acres were they to be laid out flat. The balloon has about 30 million cubic feet in capacity, and at the time of launch, it stretched out all and thin–reaching some 55 stories high. Uninflated, the balloon weighs almost 4,000 pounds.

Baumgartner ascended in a space capsule made up of four components. First there’s the pressure sphere, molded from fiberglass and epoxy painted with fireproof paint. The sphere will be pressurized to eight pounds per square inch. Next there is a cage that surrounds the pressure sphere, “made from welded Chrome-Moly (chromium molybdenum) aircraft tubing/pipes,” informs Red Bull. A foam-insulated skin or “shell” surrounded the pressure sphere and cage, and then an eight-foot-diameter base protected the vessel with the help of crush pads designed to handle 8 Gs on impact.

Red Bull also has information on the cameras and communications, the parachute, the backup safety systems, and the chest pack (“a one-of-a-kind technology hub no bigger than a lunch pail”) which were used during the record-setting plummet.

All in all, for a stunt from an energy drink company, there’s a whole lot of science and technology involved. 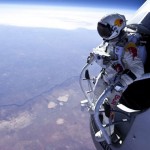 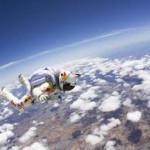 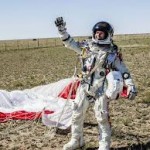 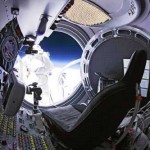