Bringing daydreams to life is what French artist Olivier Grossetête does best. Known for his visionary installation designs, this year for the United Kingdom’s Tatton Japanese Park Biennial, Grossetête designed Pont de Singe Bridge. Themed around flight, in an effort to test the boundaries of design this is Grossetête’s second floating infrastructure. “I like to compare the different types of laws, both physical and social.” Grossetête says. The artists first attempt at a zeppelin like bridge was in 2007, as the Pont Suspendu hovered over Château Ferry Lacombe in France.

Without a background in engineering, for this particular project Grossetête turned to his parents, both professors of physical science. In addition to his parents he also contacted a safety engineer to help calculate preparatory lift and drag.

Beyond just a safety precaution, the bridge was placed over water to “create the sensation of an out fields.” Grossetête says. “Gateway arises somehow from another dimension which offers a strange mixture between mystery and clear.”

In theory the bridge would have the capabilities for one person to cross at a time. Unfortunately, due to weather conditions and other obstacles no one was able to cross the bridge the duration of the installation. “Movements caused by the influence of wind on the balloons make it alive or even threatening depending on the strength of it.” Grossetête says. “The force exerted on the ball when winds of 80 km is about 2.5 tons, and 6.3 tons with winds of 130 km / h.”

Pushing the boundaries of possible, building these bridges is “man’s effort to counteract gravity.” Grossetête says.

Pont de Singe was about more that just making a visual dream come true. Inspired by water levels rising and natural disasters like Hurricane Sandy, Grossetête through innovative art sought to create something that could float above water. A “low impact, temporary design that can respond to its natural environment.” Grossetête says. “Replacing the bearings by helium balloons, the bridge seems to abstract laws of gravity and questions our perception.”

Inspiration for Grossetête’s work is often influenced by nature, as previously this year the artist contributed installation “Un Bateau Ivre” or “A Drunk Boat” in French exhibition Remember the Sea held by the General Council of Bouches-du-Rhône at the Castle Avignon.

The exhibit challenged the idea of “countless dreams and utopias.” States the General Council of Bouches-du-Rhône. “Both a symbol of infinity and omnipotence the sea inspires man … Depths of anguish and immensity of the dream trips and wonderful, this range of perpetual motion has ceased to be a source of fascination, a subject of inspiration for designers.”

Despite the difficulties in execution of art based design, it is an asset to the creative world as it embraces the impossible as possible. As our natural environment evolves, responsive and sustainable innovation in design maintains a constant priority. Bridges like Grossetête’s Pont de Singe challenge the design world to question the future of floating infrastructures, as artistic dreams become realities.

For more information on Olivier Grossetête’s projects and designs check out: 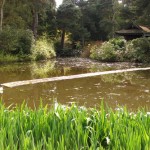 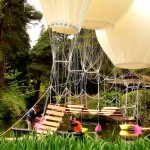 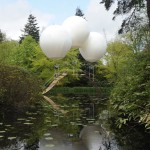