The Nike Pro TurboSpeed is, as the name vividly suggests, a track uniform that offers professional athletes an advantage over their rivals. Through the clever use of aerodynamic techniques more commonly found on golf balls, the company has found a way to shave milliseconds off a sprinter’s time. Or at least that’s the bold claim Nike is making.

In creating the Pro TurboSpeed Nike has added particular patterns to certain areas of the uniform. This includes on the shoulders, arms, and calves, all parts of the body which create resistance when we run. The dimples, which is what they resemble, were influenced by those which have been present on golf balls since the beginning of the 20th century.

To understand why Nike chose to add dimples, or “surface architectures” as the company prefers to call them, to its latest track uniform we first have to understand why the surface of a golf ball (even one made from lobster shells) isn’t perfectly smooth. The hundreds of dimples present on each golf ball create a turbulent rather than laminar layer of air molecules, which hold to the surface of the golf ball more efficiently and for longer than they would a smooth ball. This reduces the wake and therefore the drag on the ball. Nike suggests the same principles can be applied to the clothing worn by athletes.

The effect of these dimples, as well as other aspects of the uniform, is to shave up to 0.023 seconds off the time taken to run 100 meters. This is based on Nike’s own wind tunnel data and set against its previous track uniform. While 0.023 seconds doesn’t sound like much, in the 100 meters sprint it can be the difference between coming third and fourth, or between setting a personal best and a new world record.

With the London 2012 Olympics set to kick off on July 27, it’s rather intriguing that an innovation used in arguably the slowest mainstream sport is now being used in one of the fastest. Runners from the U.S., Russia, China, and Germany will be using the Nike Pro TurboSpeed at the Games.

Whatever advantage these track uniforms offer the athletes who don them, the result will still primarily be about ability – unlike some other sports where technology and innovation is somewhat overpowering the skill of those taking part. For better or worse. 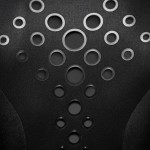 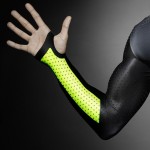 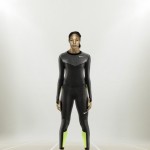