The Creative and Business Lessons of the Mars Rover

Forget the rarified image of NASA projects. Before it even reached Mars, the Mars rover Curiosity had already influenced and borrowed from an eclectic range of industries back on Earth.

As the most advanced Mars rover, Curiosity, prepared to touch down on the red planet at 1:31 a.m. EDT Aug. 6 after an eight-month journey, its impact had already been felt on Earth.

During the nine-year, $2.5 billion development of the Mars Science Laboratory – a roughly 2,000-lb., 10-feet long x 9-feet wide x 7-feet tall mobile science lab that will search for remnants of life over the next two years – NASA engineers and scientists have engaged a dance of ideas with earthly industry.

“People think of JPL as purely space science, but we work on any kind of challenging robotics applications, which involve a lot of collaborations with industry,” says Matthew Robinson, Curiosity’s lead robotic arm rover planner and systems engineer. “We also have quite an eclectic live group of engineers pulling from respective backgrounds and interests.”

“From a business standpoint, we came up with the ideas,” adds Jordan Evans, engineering development and operations manager. “But if there were things that were just too difficult to fabricate, or we knew we were going to need to invent something that others may already have invented, but just not applied to Mars, we worked with them.”

How JPL engineers approached their engineering, process and design challenges also offers lessons for traditional business in cultivating creative ideas. At last week’s Media Day, held at JPL’s Mars Yard – a 1,500-square-foot rover test bed approximating the sandy, rocky Martian landscape – several Curiosity engineers weighed in on the building blocks of that creative process, what business could learn from it, and what they took away from industry.

Allow Some Whimsy into your R&D Process

A typical rover idea might start out as simply as a drawing on a napkin, before migrating to 3D computer-aided design or simulation, plastic model, engineering prototype or proof-of-concept model, and finally a production model.

“That process is very much like industrial R&D”’ says Robinson. “But business has a lot of potential to work out kinks with tens of thousands of units. Ours is a production of one.” So the methods to convey those ideas can get fairly whimsical – one supervisor used a coffee can and string, while another drew upon his art background for animation simulations.

The team was also big on tactile and visual imagination prompts. “There’s something about being able to touch a model, or move an object around in a simulated world, that gets the juices flowing,” he adds. “Sometimes we’d go into the test bed, stand and look at the rover, and watch it go through its paces, and it would make us think of new ideas and new ways to approach things.”

No Idea is too Crazy. Really

JPL brainstorming sessions are a creative, noisy burst of uncensored, unedited ideas that ultimately survive on the basis of scientific analysis.

“Early in the process, it’s a no-critique zone. The goal is to get any idea, no matter how crazy, on the table,” says Allen Chen, the entry, descent and landing operations lead. “We’re throwing up ideas on a blank, white canvas. You’re not allowed to say what’s wrong with someone’s idea, only how to make it better.” The best ones continue on to a more stringent analytical vetting. “It goes from a very open-ended, non-quantitative approach, to something much more detailed as we get further along in the design process.”

Be Willing to Start from Scratch

Just because ideas may came from mistakes and past experiences, the JPL team doesn’t get complacent about finding a brand new solution.

“With each mission, we build on our past experience, but in certain ways, it’s also a clean slate and we’re willing to try new things,” says Robinson. “Industry should be willing to think a little differently. In terms of out-of-the-box thinking, don’t throw out ideas too early or narrow in on a concept too quickly. Just because you’ve done things a certain way for years doesn’t mean it’s the best or right way to do something. Be willing to try other ideas and cast a wide net.”

Don’t get Bogged Down by Complexity: Break Down Problems into Manageable Units

Because there are so many different, complex systems operating in tandem on the rover, engineering teams take on compartmentalized tasks within those systems. In the case of mobility, the Curiosity test replica, which contains cameras and software, is used for more “intelligent” tasks, such as obstacle avoidance, by autonomously imaging to gauge whether it’s going the right way. The Scarecrow rover – so named, because it “doesn’t have a brain” (computer) – is used for heartier tasks, like driving over rocks and steep slopes.

“We take the overall problem and break it into different subsets, then find a way to solve each of those sub problems,” says Matt Heverly, lead rover driver and mobility systems engineer. “We then have to combine them in a meaningful way for an environment that we’ve never been able to test in, with a system that has never come together as a whole before. We have to make sure all the pieces of the puzzle fit together in the right way.”

The mission’s unique constraints – payload vs. mass and timing – required an open door policy among all management levels. There was constant give and take between the number of scientific instruments they could cram on board before the rover weight tipped beyond what would make a statistically-acceptable safe landing. Then there was the 21-day launch window that came around once every 26 months. Miss it – as they did in 2009 due to insufficient data – and add another half-billion to the price tag. As a result, managerial hierarchy flattens when it concerns problem solving.

“From management to worker bee, everyone has to be able to communicate and take each other seriously about the problems that come up, candidly discuss what works and what doesn’t, and allow unfiltered opinions,” says Eric Aguilar, systems integration and test manager.

“There’s not a lot of time for, `I know this was important, but I didn’t get a chance to talk to my manager today, and so I’ll wait till next week and see if that person is available,’ ” adds Evans. “In any given meeting, you’ll see four or five levels of the organization present in the meeting, so the managers have to be disciplined to let everyone be heard, and even conflict with each other, before bringing everybody back, take stock of the facts, and charge a path forward. It can get heated, because people are pretty technically passionate about their ideas, but we all know we want the same thing.”

Meanwhile, the Mars mission drew plenty of inspiration from existing businesses. Robinson adapted some the knowledge he gleaned from a previous job working on robotic paper bag stacking. The mechanism had to adjust to changes in stack dimensions, a technology he could leverage in Curiosity’s robotic arm adjusting to different sample sizes.

JPL engineers had tackled the six-wheeled, Rocker-Bogie suspension in the mobility systems of previous rovers. But this time, it was going to double as the landing gear for a much heavier vehicle, requiring more agile and stronger tubing. The mobility engineer, Jaime Waydo, happened to be an avid road cyclist, so she approached her bike manufacturer, Litespeed Bicycles, which ultimately produced that segment.

The rover’s spherical motion trackers came from the film and motion-capture animation industry. The technology – sensors feeding back to computers to track body movements–is now used to measure how far the rover moves. “It’s more cost-effective to creatively leverage solutions that other people have found to similar problems,” says Heverly.

Allow for some Harmless Subterfuge

One of the young engineers who designed Curiosity’s sample delivery section, had metal cleaning posts spell the Morse code initials of his father, a JPL manager who had passed away, as a memorial.

In a more lighthearted move, engineers made sure that they found a way to put the JPL stamp on Mars – literally. Each wheel contains three rows of marks to be used for visual odometry – where an on-board computer analyzes camera angles of the marks on the ground to determine Curiosity’s position. The original marks were the letters J, P, and L.
“That was a little too much advertising for NASA,” laughs Evans. “But if you know Morse code, you can take a look at the wheels…” 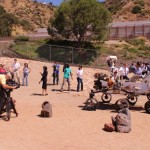 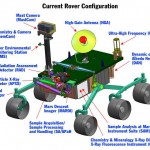 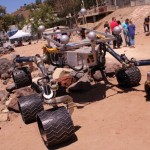