The Flying Car: Getting Closer to Takeoff

Two distinctly different approaches to a decades-old dream will soon become a reality.

One of the biggest disappointments for an entire generation of us who grew up reading the likes of Popular Science or Popular Mechanics was the often touted dream of the flying car. With the exception of the hovercraft, the flying car is one of the most commonly predicted and anticipated ideas not coming to fruition as a mainstream commercial reality.

Now in 2012, several companies are working on this idea with one in particular coming to market later this year. So what seemed so far off the mark at the time of the millennium, now, a little over a decade later seems like a soon to be actualized reality.

Terrafugia is the brainchild of inventor Carl Dietrich and is first out of the gate with it’s Transition to be manufactured by years end. Dietrich has a PHD in Aviation/Astronomics from MIT and founded Terrafugia in 2006 in Woburn, MA. The company began making test flights with a prototype by 2009, and as of 2012 is ready for manufacture albeit planning an initially modest 10 vehicles before years end.

The vehicle has 4 wheels and can almost be thought of as a road-worthy aircraft that has a 600 mile range on the ground and 400 mile range in the air. The wings are retractable in minutes, but it should be noted that the Transition does require a runway to take off. So we are still some ways away from the dream of the direct takeoff from the street that many of us envision. The vehicle runs on regular petrol and will be classified as a Lite/Sport aircraft meaning that it could be flown with a relatively modest 20 hours of flight experience. In this way it’s a direct beneficiary of the FAA’s 2004 creation of this class of aircraft which is more accessible and less regulated then more commercial or heavier class private aviation. The FAA’s move to this end was in part to promote flying by making getting a pilots license easier and to encourage innovation. Since the 2004 regulations went into effect, well over 100 types of sport and recreational aircraft have seen the light of day. Numerous people who might not otherwise have flown are now taking to the skies including Chip Yates, who recently set an electric plane speed record.

The Transition holds two people including luggage and will be priced at $279,000 and over 100 have been reserved.

Meanwhile in the Netherlands, a Dutch company called PAL-V has successfully completed test flights on it’s own three wheel flying car of the same name. The PAL-V canbe thought of as more of an enclosed motorcycle and is reported to have a motorcycle like road feel that boasts a ground fuel economy of 28 miles per gallon. The single seat vehicle has a helicopter like appearance but can be properly termed a gyrocopter in that a small rear mounted propeller provides forward momentum while a larger rotor provides lift. The PAL-V has a 213 HP rotary engine which runs on unleaded gas and has top speed of 120 miles per hour and a range of over 300 miles. It would be able to convert from car to gyrocopter in 10 minutes and would be able to fly at altitudes of up to 4000 feet. The company expects it to come to market in 2014 for a price of about $300,000.

In a sense neither of these may be regarded as the true skycars we look forward to, in that they both require a length of runway to take off. However they both represent important steps toward this reality. With the steady move forward in GPS, positioning systems and control
systems, we may by the next decade see a true skycar capable of literally taking off from the street or driveway. While many of us welcome and look forward to both of these vehicles coming to market there are some issues of reservation that must be acknowledged. The cold hard reality is that a significant amount of bad driving occurs on the worlds roadways and the notion of extending this to the skies may result in more injury, damage and fatality. In this sense everything that’s applicable to driving on roadways becomes more acute in the air in that flight requires a cognizance of three directions at once. Before a true democratization of the sky can take place it will require that control systems become more computerized and capable of autopilot like guidance which would make it easier for non-pilots to guide these types of aircraft safely. As these issues are addressed further and a more self flying computer control system become a reality we can soon see flying become as commonplace as driving. 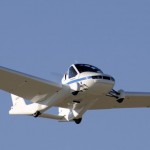 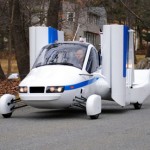 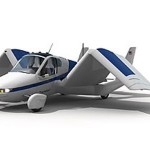 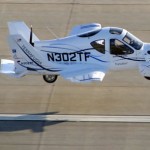 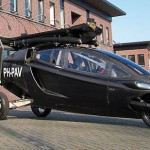